How To Play Cards Against Humanity

First, Cards Against Humanity are not suitable for people under the age of 17. It contains sensitive and vulgar statements that might be considered too much for underage people.

Basic Cards Against Humanity instructions come with a package, and we’ll deal with that first. You might be wondering why such a fun and mature game needs rules, but I assure you that the rules are not meant to restrict but rather to voice up the game and make it more interesting. Some of the instructions include: 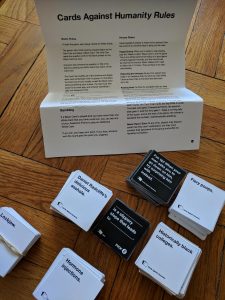 Other house rules that make the game more exciting include:

Pick 2: some black cards have pick two written at the bottom. When the czar draws out such cards, players have to combine two white cards and pass the cards to the czar in order. This is important because the czar has to read them in order. And if the card czar has claws for hands, I’ll suggest that you hold both cards with paper clips in the proper order.

Gambling: This is another way to make the game more lively if you’re so sure that you have a two-card combination that’s going to crack people up and that no one is going to beat you in that round. Why not place a bet with one of your many “awesome points” as a bet. If you win, you get to take back your “awesome point” and get your ego boost, but if you lose, you know what’s at stake friend, your “awesome point” now belongs to the winner of the round.

Rebooting the universe: this is pretty simple. You trade with one of your “awesome points” to trade as many white cards as possible for a new set of ten white cards.

God is dead: in Cards Against Humanity, the card czar is the judge and god. God is dead is played in the absence of a czar. This means you all take votes on which card is the funniest, and the card owner with the most votes wins.

Survival of the fittest: as the name suggests, it is indeed the survival of the funniest card. After each person reads each other’s white cards, each one will eliminate one card from each player, and the last card standing is the funniest, and the owner wins an “awesome point”.

Serious business: in this case,  the czar picks the three favorite cards. 3 points are awarded to the one in the first place, 2 points to the second, and an “awesome point” to the third. All these points are accumulated, and the person with the most “awesome points” is the winner at the end of the game.

Never have I ever: you don’t understand something on a card, honestly admit it so you can discard the card. It only comes with a bit of friendly humiliation. 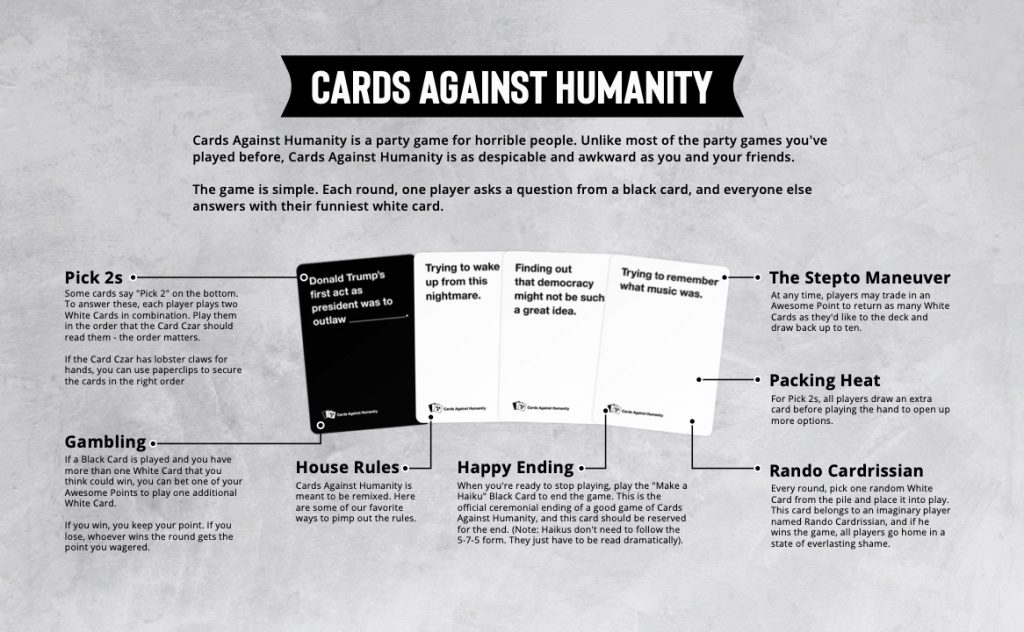 How to Win Cards Against Humanity?

The main point of Cards Against Humanity is fun, but if you’re naturally a competitive spirit, I’m sure not winning doesn’t sound fun to you. Here are some tips that can help you win around:

As a player in a game of Cards Against Humanity, an innate sense of humor is beneficial. Amusing people don’t have many challenges in selecting the funniest card.

How to Play Cards Against Humanity as a Strip Drinking Game? 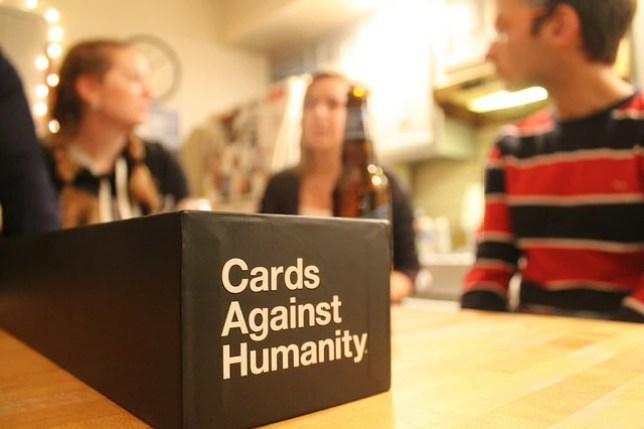 It doesn’t matter if you like to strip or watch others strip or if you enjoy drinking or watching others drink. In this game, either you’re the entertainer, or you’re being entertained.

I see you’re already rubbing your hands in anticipation. The game has the same rules as the core game, but with twists dares that make the game more lively, you don’t need much to play this game. All you need include:

If you’re not playing, you should not be in the room at all. It’s unfair to watch others strip and drink while you are not involved in the action.

You are wondering how to play the Cards Against Humanity drinking game. It’s almost the same as the core game. The difference is that the card czar will choose both a winner and a loser. Now here’s where things get interesting, the winner will take a shot, yeah, you read that right, while the loser will strip, as expected, they’re going to take off a piece of their clothing.

Gambling, reboot the universe, packing heat, Rando Cardrissian, God is dead, survival of the fittest,  never have I ever, all apply to this game.

The difference in the strip-drink Cards Against Humanity house rules is that instead of just losing or winning “awesome points”, you get to lose your clothes as well as drink. Also, there are more house rules. Do you know what that means? More fun.

How to play the strip-drink Cards Against Humanity game funny?

There are two ways examples: the more people, the merrier. More players equal more stripping and more drinking because no one will be left behind. You can have the czar choose two winners and two losers. The first winner takes a shot or any other strong drink, and the second takes half a shot or a lighter drink, and the two losers strip. At the end of the game, everyone would have been involved.

There are many ways to make the game more fun. Another method of playing the game is more cards or using a new edition. They make the game last longer and more fun.

Who Goes First in Cards Against Humanity?

The czar usually goes first. The czar is generally selected from the players and is the one who pooped recently. The czar reads the question or the fill-in-the-blank statement on the black card out loud. Then the other players select a white card out of their 10 cards to answer the question or fill in the blank and pass it face down to the czar.

The card czar then shuffles all of the answers and reads each combination out loud to other players, the card czar then picks the favorite, and the person who owns the card gets to keep the black card as an “awesome point”.

A new round begins with a new black card and a new set of white cards.

How Many Cards in Cards Against Humanity?

Cards Against Humanity is a party game strictly for adults, the box formerly had 550 cards, but the new edition has added 50 more cards to make the game last longer, more fun, and refreshing. With this, you can get the party started, no more boring parties for you and your friends.

Cards Against Humanity have 500 white cards and 100 black cards. You can play it for as long as you want and invite as many people as possible. 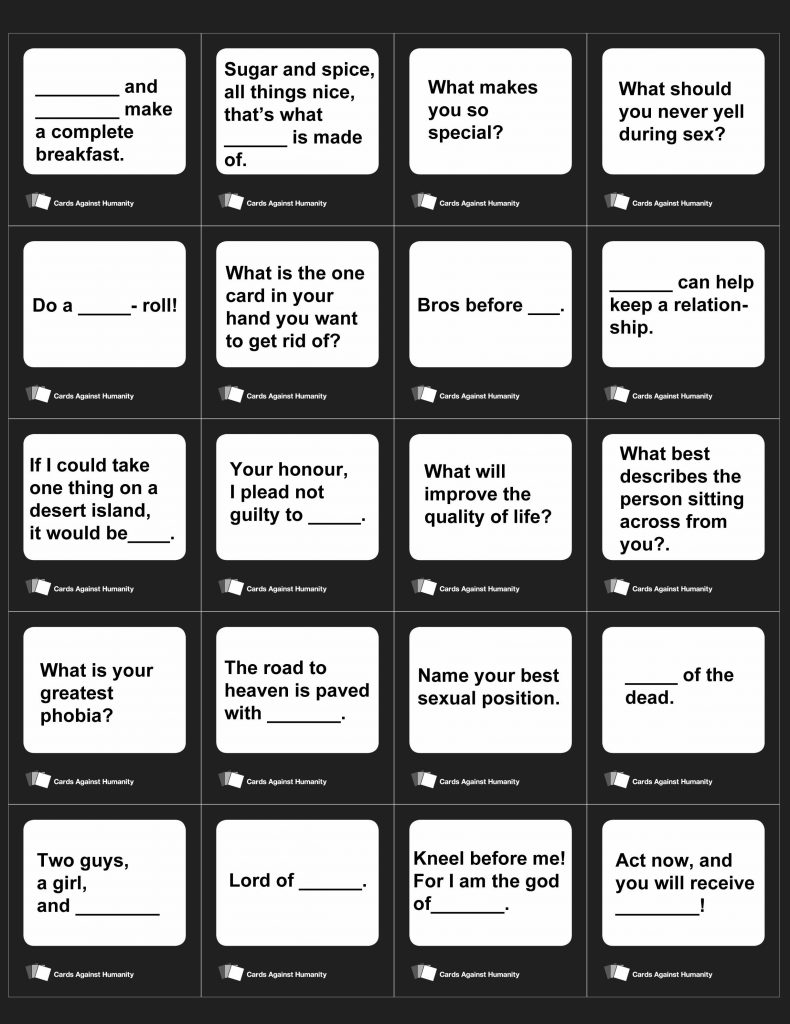 What does haiku mean in Cards Against Humanity?

Haiku is originally a Japanese word, and it means a short poem that usually consists of three lines and 17 syllables. The first line contains five syllables, the second has 7 syllables, and the third one contains 5 syllables.

The haiku is used to end a game and determine the winner and the loser.

When you want to end the game, the czar draws up the haiku card, while every other player uses the draw 2 pick 3 rule, and the czar judges who made the best combination, and that player wins. The czar then puts the drawcard at the center of the table, ending the game.

I’m sure you’re already wondering what the draw 2 pick 3 is. It’s not complex, and it simply means you first have to draw 2 white cards from the deck and add them to your pile of white cards. Then make a three-card combination to form a hilarious sentence, quote, or just three random funny phrases that make sense when put together. 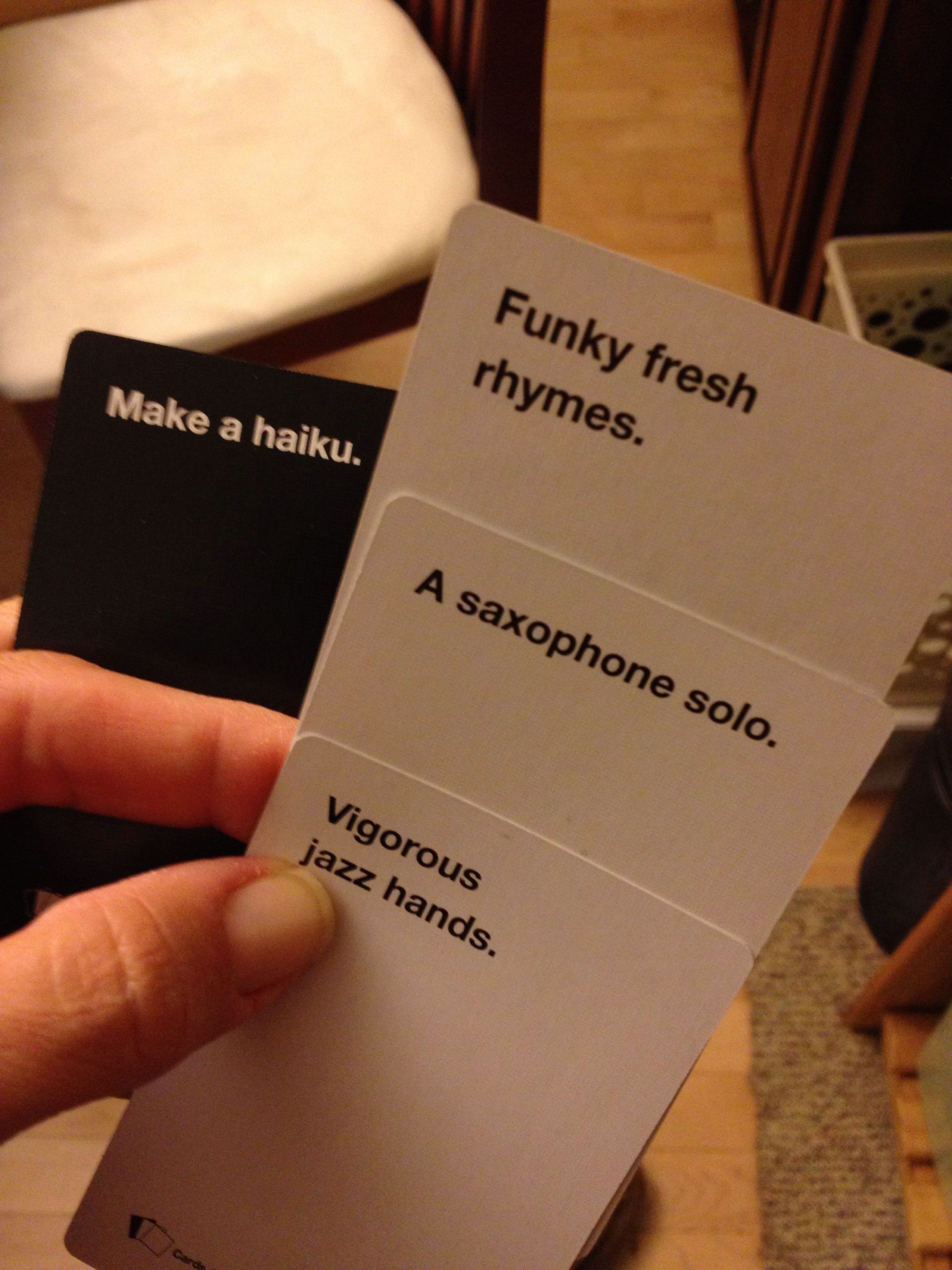 How to Happy Ending the Game?

The perfect way to happy end a game is to make a black haiku card to honorably end the game. You’ve probably been playing for hours long, you’re tired and bored, and know all the combinations, you just want to put an end to the game, the “make a haiku card” is only used when it’s time for the final laugh that signifies the end of the game.

It is called the happy ending because you get to laugh, and also, everyone is pleased because the judgment is fair.

How to Play the other Versions of Cards Against Humanity?